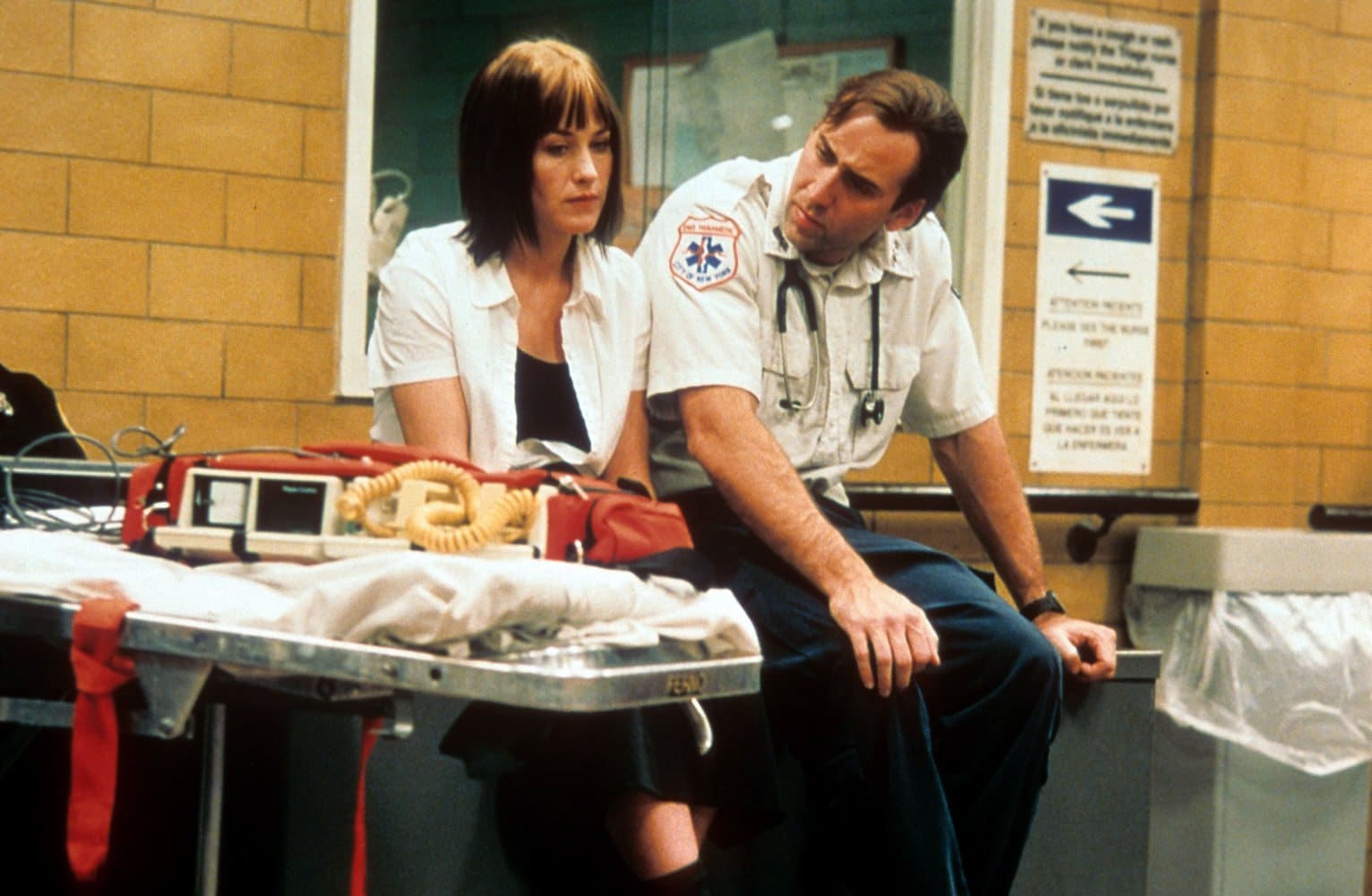 Bringing Out the Dead hurtles, sirens blaring through the NYC streets during insomniac hours. It’s manic frenzy of morose drama, tragic thrills and cracked comedy blasted with the urgency of a Code 1 emergency.

Martin Scorsese (After Hours) Directs Paul Schrader’s (Taxi Driver) adaptation of Joe Connelly’s autobiographical recount of his time as a nocturnal Big Apple ambulance driver. Shaping a tone of immediacy with a combination of quick cuts, extreme angles and unpredictable sound design. This is Scorsese exploring the medium with creative freedom.

Unrestrained by plot, this tenuously structured mood piece via character study threatens to descend into farce at anytime but the Director’s intuitive restraint keeps us appropriately teetering on the precipice of the abyss for nearly the entire running time. All the more impressive and harrowing when this chaotic vision is filtered through Frank Pearce’s (Nicolas Cage) blood shot eyes.

Frank has been patrolling the grey, light starved city too long. Responded to too many 911 calls. Witnessed too much tragedy, death and destruction. Struggling in emotional agony, his psyche doing its best to defend itself against the relentless onslaught of the metropolitan savagery. Surviving on a diet of stimulants, surrounded by junkies, hookers and the other assorted flotsam and jetsam of society Pearce walks the razors edge. Snapping into violent madness imminent.

Taking place over 72 hours Bringing Out The Dead resembles Taxi Driver on an intravenous drip of After Hours. That the film remains coherent and emotionally deadly, maintaining velocity is an impressive display of comprehensive filmmaking. Every element precisely positioned to keep audience attention, add impact to the extremities of urban humanity and refine deeper philosophical and psychological metaphors.

A critical component to keeping up with the density of ideas zooming by is the soundtrack coded in the same way Soderberg color codes (See. The Underneath, Out of Sight). Here each ambulance driver has his own theme music. The compensating Larry (John Goodman) gets classic 60’s rock, the evangelical Marcus (Ving Rhames) takes Motown and destructive force Tom (tom Sizemore) kidnaps Punk. Right from the opening credits where Van Morrison wails the blues of claustrophobic death in TB Sheets, Scorsese takes control and pilots us confidently towards oblivion. TB Sheets by Van Morrison because its perfection.

Establishing a blurred, fractured reality, the motley line up of fringe dwelling characters becomes a rich landscape of abnormality for the cast to assimilate.

Nic Cage made a name for himself as a fearless craftsman dedicated to suffocation in his roles. (Vampire Kiss, Wild at Heart) Seldom has his ability to build a character been more focused. His trademark flailing of body parts and facial distortions zipped in a straight jacket until Frank’s living hell has consumed him. Gaunt and under nourished Cage’s grim dominance of center stage in this suicidal circus contributes immeasurably to the nervous, perspiring atmosphere of sardonic hopelessness.

Furthering the spasm of dread Goodman (Barton Fink), Sizemore (Heat) and Rhames (Out of Sight) trigger load the ticking time bomb population. As good as all the stars are it is the local extras, hungry bit players and co-stars that draw you into the essential authenticity that forms believability.

JD’s favourite, Afemo Omilami (Tigerland) as hospital security and his delivery of the line, “Don’t make me take of these sunglasses.” and Mary Beth Hurt (World According to Garp) for her tough love nurse. TV fans, scan for Sgt. Angel Batista (David Zayas) from Dexter, Tony Sopranos sister (Aida Turturro) and Carla (Judy Reyes) from Scrubs in small roles.

Rosanna Arquette’s (After Hours) True Romance sister Patricia Arquette is possibly the films only weakness. As the potential lightning rod for Frank’s retribution, redemption and rebirth her Mary Burke is underwhelming in mannerism and line reading. Her contradiction of fragility with hard knock wisdom doesn’t quite jibe the way it should. Not terrible, just outclassed in front of the camera.

A critical success but box office bomb upon release, time has been kind to the film. For Mr. Doe it’s a culmination of Scorsese’ cinematic eccentricities. A whirlwind of techniques, injecting a hypodermic needle of style into the marrow of the stories substance. This is a unique work that has rightfully found a cult following and along with its 1971 emergency services counterpart Mother, Jugs and Speed will continue to surprise with its gritty smiles and rule breaking spectacle.